导读： The world& 39;s wealthiest man Bill Gates would still pick up a $100 bill on the street, but he has no tips 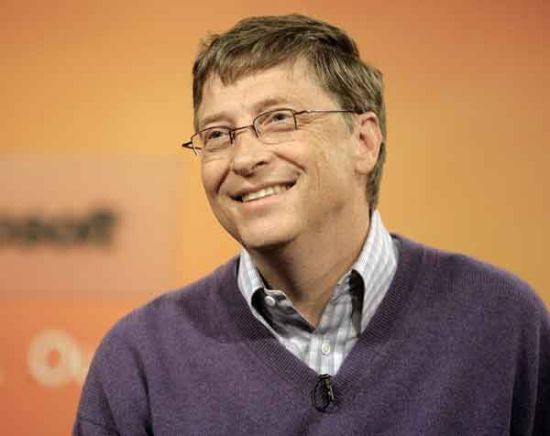 Oh, and the 58-year-old Microsoft co-founder says he can still leap over a chair, if it is a small one.

Those and other insights came as Gates fielded questions on Monday in an online chat session at social news website Reddit.com.

Along with playful personal perspectives, Gates shared thoughts on philanthropy, government snooping, and his return to a hands-on role at Microsoft to assist newly-appointed chief executive Satya Nadella.

"Satya is taking a fresh view of where Microsoft is -- strengths and weaknesses," Gates said.

"A new person gets to step back and change the focus in some ways. He is off to a great start."

Gates noted that he doesn't plan to stay at the office for days at a time as he did in his younger days when he had "energy and naivete" on his side.

He expected to give about a third of his work time to Microsoft, and the remaining two-thirds to the philanthropic foundation he runs with his wife.

He dismissed the notion of being the biggest philanthropist, contending that while he gives a lot of money to charitable causes, aid workers living in difficult conditions sacrifice more than he does.

When asked his thoughts on US spy agencies snooping on computer use, Gates described it as a 'complex' issue that will grow in importance as cameras and sensors in devices collect more information about users.

"We need to have trust in the way information is protected and gathered," Gates said.

"There is a role for the government to try and stop crime and terrorism but it will have to be more open."

He confided that his most expensive guilty pleasure purchase was a plane, quickly adding that it has been indispensible for travel in connection with the Bill and Melinda Gates Foundation.

He said he really enjoys the old-fashioned card game Bridge, leaving most of the videogame play on the home Microsoft Xbox console to his son.

Gates said he also cleans the dinner dishes every night, because he likes the way he does it.